The Waikato Kendo Club (WKC) is a university-based club. It was established by Sam Tsai and Marleen Charng, a young Taiwanese couple, in March 1999. The Club started with one member and has rapidly developed into the biggest New Zealand Kendo Club after merely five years. The majority of WKC members are university students. Now the club has about fifty members, from age seven to sixty, with various cultural backgrounds. Significantly, it is the only Kendo club being run by new immigrants in New Zealand so far. Marleen is also selected to be the first Asian staffs members of the New Zealand Kendo Federation. Although the WKC is a fairly young club, it has developed well in both its kendo strength and its club organisation.


In 2002, the Waikato Kendo Club represented the NZKF participating in the Second Asian (Regional) Invitational Kendo Tournament, in Hong Kong. Eventually, this New Zealand team brought back a bronze medal by competing with sixteen male teams and eight female teams from ten countries. It was the very first international honour in New Zealand Kendo history. The WKC has also achieved great success in nationwide Kendo competitions in the past few years. In 2001's First New Zealand Kendo Federation Championship, the WKC won the male team championship, took second place in the female individual competition and third place in the male individual competition and won the Spirit Award in the club's first public performance. One year later, the Waikato Kendo Club gained both first and fourth place in the male individual competition and second place in both the male and female team competitions. In terms of club organisation, the WKC has also received many commendations and honours such as Blues Awards from Waikato University.


The significant contribution by the two leaders is one of the crucial factors that lead the WKC to make such outstanding achievements in such a short time. Sam and Marleen were both high school teachers, started practicing Kendo in 1983 and achieved great success in Taiwan. In 1997, they arrived in New Zealand with rich athletic and teaching experiences. In order to finish Sam's PhD of Science Education at the University of Waikato, the couple settled down in Hamilton. Like many other new immigrants, they had to start everything from scratch. Sam and Marleen's enthusiasm for Kendo and their sense of responsibility from being teachers made everything possible. They have been teaching Kendo as volunteers for five years and have contributed all of their skill and knowledge to the students without reservation. Moreover, in order to perfect her training method, Marleen especially enrolled in postgraduate study of Leisure and Sport intending to combine her own competition experience and some scientific training methods into the traditional Kendo training system. This has helped the WKC become strong enough to compete with other Kendo Clubs, with much longer histories, from both New Zealand and Asia after such a short period. 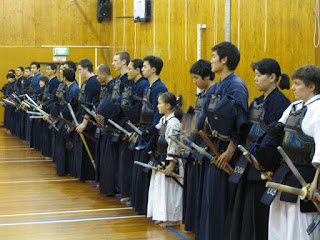 The WKC is not only an ideal place to build up a good physique, but also a friendly community for increasing international culture exchange. The composition of club members is very international, including Japanese, Korean, Mainland Chinese, Taiwanese, British, and, of course, New Zealanders. Although the WKC is lead by a Taiwanese couple, it is aware of the need to keep a balance between local and international Kendo practitioners. Sam and Marleen use English to teach Kendo and encourage all the Kendo learners to communicate with each other in English. The club provides the international students and new immigrants with a good opportunity to be involved in local society. It also offers local Kendo lovers a great chance to understand various cultures.


Kendo literarily means 'the way of the sword'. The purpose of doing Kendo is that people try to realise and understand the principle of being a good human and the philosophy of having a healthy and positive life by learning how to manipulate the sword. Therefore, learning Kendo is not just for keeping fit, but also for improving people's mentality and humanity. The club is a very supportive environment that helps every member, especially young people, to explore both their physical and their mental limitations, overcome their own weaknesses, and to develop strong and healthy characters. The WKC is proud that its members can manage study, Kendo training and friendship all very well. The first generation of WKC members has grown up from Kendo beginners to Second Dan Kendo practitioners. (There is a total of ten Dans (ranks) in Kendo, however the Eighth Dan is the highest rank judged by a performance examination.) They now can be assistants and help the beginners learn the basic Kendo movements. The majority of WKC members are university students and Kendo beginners. Sam and Marleen always remind the club members to follow the spirit of martial arts and to transfer it to their study and daily life. As a fact, the club has many Scholarship holders, Golden Key Honor Society members and excellent students. 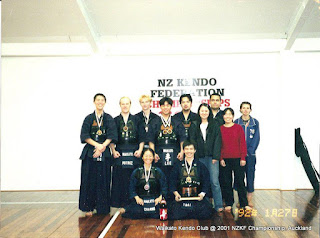 "Friendship through Kendo" is the Club's philosophy. The WKC is well known as a family-like club in New Zealand Kendo circles. The Club is like Sam and Marleen's own child. They gave birth to it and witnessed it growing up. They look after all club members and treat them as friends. It has become a club tradition of great influence for everyone in the club. The senior members help the beginners and the older people take care of the youth. Compared with other martial arts, Kendo almost has no limitation to the player's age. Basically, people can enjoy playing Kendo from the age of eight to the age of eighty.


Sam and Marleen train the beginners with great patience and give them confidence. They also constantly encourage members to challenge their limitations and to never give up. Considering the economic condition of many students when it comes to affording their own Kendo equipment, Marleen also tries hard to find the suppliers of Kendo equipment with cheaper prices and good quality. Gathering at the teachers' home after training on Saturday night has become a regular club social activity. Club members can talk about Kendo and enjoy Marleen's delicious cooking at the same time. The two teachers regard their contribution to the club and their students as a way to repay their teachers' kindness to them. Similarly, club members would also do anything to help Sam and Marleen. The whole club spontaneously turned out when Sam and Marleen needed help to move into a new house. Several older members looked after the two teachers' daily life when Marleen had her baby girl. The friendship between club members starts from their shared interest in Kendo, and their close relationships are developed from each other's respect, trust, understanding and solicitude.


The WKC also extends its friendship to both national and international societies. The club invites foreign high-Dan Kendo teachers to visit the WFC and holds Kendo seminars every year. Sam also went overseas to attend an international Kendo coach seminar in Japan last year. He came back with good advice and Kendo philosophies from many foreign Kendo masters, and shared this valuable information with all the club members. Now, the WKC is preparing for the coming National Annual Kendo Camp. As a member of the NZKF, the WKC is the host of this year's most important nationwide annual Kendo activity. Seven other Kendo clubs from all over the country will gather in Hamilton from August 29th to 31st. The club's old friend, Japanese Kendo instructor Noriaki Higashide sensei (sixth Dan) has accepted the NZKF's invitation to attend the camp. Through those activities, the WFC not only enhances the communication between the Kendo clubs and builds friendship with other Kendo lovers, but also provides Kendo practitioners with a good opportunity to broaden their outlook, appreciate various Kendo styles, learn from each other's strong points and improve their Kendo skills.


Sam and Marleen believe that their Kendo club is a window, through which they can spread good oriental culture and the spirit of martial arts into the local society. They plan to set up a new branch of the WKC in local secondary schools and let more children and teenagers start their Kendo lives at early ages. In June next year, WKC will represent NZ again in the 4th World Kumdo Championship in Korea and wish to give the best performance of New Zealand Kendo on the international stage.