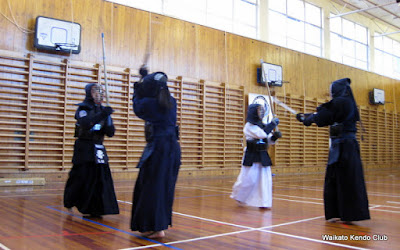 After Tatsuya's visit, Marleen has asked me write someting about Kirikaeshi (切り返し). Instead of starting from scratch, I used the article in Wikipedia (only add some colours or break sections to emphasis some points) and we can discuss it from here:

From Wikipedia, the free encyclopedia

Kirikaeshi (切り返し) is a kendo exercise, combining the practice of attacking and receiving strikes and is meant to develop physical strength, spirit, and vigor. It is a drill done with a partner that involves a succession of strikes to the head (men, in Japanese). Kirikaeshi was established as a basic exercise around the end of the Meiji era (1868-1912). The exercise typically begins with a strike to the center of the head, followed by a series of alternating strikes to the left and right sides of the head (yokomen). Though the exact method of kirikaeshi can vary among dojo, the most common scheme involves a single strike to the center of the head, followed by four lateral strikes going forward (starting on the receiver's left side), and five strokes going backward. Kirikaeshi practice is the staple of kendo training. It teaches a number of important principles including proper distance and timing, accuracy, rhythm, and smoothness.

When kirikaeshi is executed properly, the two players involved will benefit from the practice of precision attacking and the quick reaction/perception in receiving such an attack. The one who receives the kirikaeshi leads the attacker thus controlling the pace and maai (fighting distance) of the training.

* The receiver may allow hits to the head but must also demonstrate tenouchi (balance strength) while gripping the shinai.

* The attacker must make strong, precise and timed strikes while retaining relaxed shoulders and steady breathing. This will result in increased stamina.

* For both the attacker and receiver, posture must be kept proper and footwork and movement should be smooth for this practice to facilitate the weeding out of bad habits. If kirikaeshi is practiced regularly, the application will benefit the practitioner from the improvement of basic skills to the perfect execution in combat.

After taiatari (body check, only if both Kendoka are wearing armour), swing the shinai up in a large movement, and beginning with left men, strike alternate left and right men 9 times (4 forward and 5 back). Then move quickly from tōma to chūdan, and boldly strike immediately. This process should then be repeated.

· Strike left and right men correctly, while shouting "men, men, men" in a loud voice.
· Raise your shinai high over your head each time in a large and fully extended movement.
· If you try to perform this too quickly, you will fail to execute a correct strike.
· After the strike, your right kobushi should not diverge from a centred straight line.

When receiving Kirikaeshi with the shinai, you should hold the shinai vertically in front of your left and men alternately, and use tenouchi to shield against you partner's shinai.