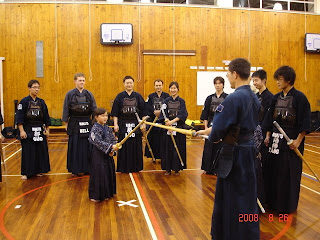 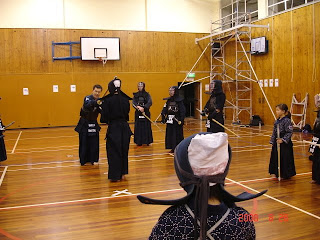 Thanks to Clement's contribution for noting the training on
2008 August 26.

Review of what we have done this kendo year:

After all that training, we have improved a lot of many areas, yet we still have a lot more to improve on. There are a few points that Sam Sensei wants to remind us:


Tan-den - Especially with Kiai, the Ki should resonate from the Tan-den (around the lower Abdomen) and this produces a stronger and deeper sound. Marleen Sensei explained that it makes your kamae stronger with the tightening of the thighs. A saying "Qi Chen Dan Ten" literally translates to Ki from the Tan-den.

Footwook - An exercise that we did today showed that some of us had trouble with our left ankle as we step forward. Sam Sensei explained that it was because we did not move our body but only feet. He suggested that we walk from the hip bone instead of the right leg. This way the weight of our body is evenly distributed.

Cut for Ippon - We know how to cut properly, now we should cut every cut as if it was the winning one. This is so that the hours spent on practising kihon can be applied to in shiai. Our strikes need to be smooth and consistent. This means merging two parts of a cut together (not stopping the shinai while swinging up).

Seme - Seme is extremely important in kendo. Sam Sensei said that some of our seme is merely the step you take before you strike. This makes your cuts predictable as opponents will be able to see when you are coming. Sam Sensei alludes to the sport of Long Jumping where a person has a running start before making the leap. Some of our seme was the running start and is easy to counter. Rather, our seme should be like a Standing Jump where a person leaps from a standing position.

In kendo, we seme so that we can find the opening. Once we see one, we strike. So when we seme, we need to be flexible to change our cuts and actions to suit the situation immediately. (I'm sorry if I'm not very clear, please ask me if you have any questions)

Sam Sensei said we should imagine that we are protecting a large amount of gold. Everytime we seme backwards, we lose a bit of our gold to the opponent, if we seme forward, we gain the opponent's gold. We should seme forward so we get more gold. We like gold.

Another thing noted was that our seme should be short and quick. Opponents will not be able to judge the distance quickly and become pressured to strike. This is an effective way of breaking your opponent for the opening.

New Waza - We were introduced a new waza whereby the opponent lowers the shinai below yours. Since the shinai does not obstruct the men, you are fooled into thinking you can strike a men cut; however, as you attempt to strike men, the opponent's strikes a debana jkote.

The different styles of Kote - There are two different ways of cutting kote. The Japanese method involves the stopping the shinai at the height of the ten-no-uchi after the cut. The Korean method involves drawing back the shinai a full 180 degree after the cut. The Korean style makes kote easier to see but you reduce the chance to strike immediately after. It is up to you which option you prefer, but Sam Sensei believes the Japanese method is safer.

Do not strike our younger kendokas - The children's head are softer and even a light hit might create a bruise to the head. So next time when training against kendokas like Eric, Joyce and Peter, let them cut you (until further notice).

Ps. I don't know if I want to cover the "Seme slowly in as if you are offering a flower to a girl rather than jumping in and asking for marriage" haha! :-)

Unknown said…
I have saved this great review. Thank you Clement!

James Huang said…
thank you clement
this is a wonderful review