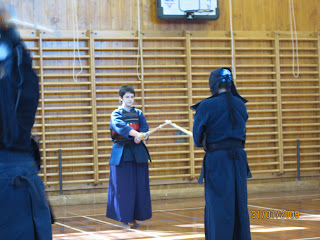 I asked sensei today if I could try my bogu to see what my poor sempais were going through when I hit them. I got the ok (probably because otherwise I would continue hitting like the girl that I am :P).

Robin and Clement were very kind to show me even a little more of what kendo is.

It's SO much fun!

Yet, I also understood what sensei Sam said about kendo being two martial arts and not one; one pre bogu and one after. The first hit I received was scary however I also felt very secure as I found that yes, indeed, I did not die (though I was a bit stressed after, as I was waiting for the sky to fall, and it would not ). After that it become free and fun, fact for which I thank my sempais; especially Clement who showed how much fun the actual fighting/sparring can be.

Today has also increased my understanding of kendo a bit more. I'd like to share what I found with my fellow junior kendoka. Perhaps you know already what follows, case in which oh my god you are smart

Basically, every little thing you do is important!

I did not tie up my kote properly because I took a lot of time to do the men.I could not use my hands properly but my head felt fine. Kinda get what I'm getting at?

Any time taken to prepare will pay off greatly in the long run.Every aspect of a cut will impact on the total form and accuracy. Every second taken to learn how to dress will help you stay safe during training. Even if not expecting to fight I should be fully prepared just in case. (I think this may be along the lines of what Ari said about Zanshin).

My respect has increased tremendously for my sempais as I now understand why they take care so much notice of anything they or we do, as there is no inconsequential act.

From now on I will try even harder to learn every little aspect of a correct cut so I can get as strong as my senpais. I will also go on 'google is my friend' (thank you Robin :) ) to see different kendokas' perspective on how the gear is supposed to sit :)