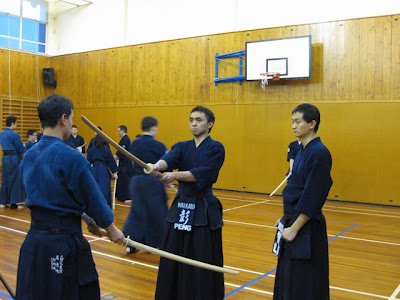 Actually, this shodan didn’t come easy for me

There I was in 2007, happily hacking and smashing people with my bamboo sticks. Things were going really well in my life, my job was good and my relationship was better than ever. Then along came Han-Uan, and I had no idea what I was about to get into…

After Han-Uan was born, things start to feel different pretty quickly. It was a life changing experience that you can never prepare for. My happy and cheerful girl, Marilyn who used to sing “hakuna-matata” (from Lion King) with me became more and more gloomy and depressed as the days passed, trying to cope with the stress of motherhood and not having her family around her to help. People all around me were telling me that I should focus more on family rather than spending time on my hobby and interests. Pressure was coming from everywhere; her family, my family and some colleagues too.

I looked after our pet Chihuahua before and so I thought a young baby couldn’t be more difficult than a pet, right? WRONG! Han-Uan was fed on demand every 45minutes and did not sleep for more than 1 hour at a time. No for long, Marilyn was starting to look more and more like a panda - a very grumpy one.

Asian families is not keen on the European methods of controlled crying, setting up routines and things like that so we had quite a few arguments at that time. Things were just a big mess. There was a guilt trap set up for me, that because I was doing kendo so I couldn’t put all my time into helping out looking after Han-uan; and ofcourse pressure were on me to stop Kendo.

Whilst back in kendo I felt that I was quite behind as some of my classmates have already progress to black belt and I was still lingering in the kyu level. My basics were terrible, I was also struggling to do well in shi ai and junior people were starting to catch up and surpassing me. So I said to myself: “f*ck this, I am going to continue kendo, I don’t care!”

Things were spiraling out of control at home. We were having difficulty coping and one day when Han-Uan was really bad, I decided enough is enough and I am going to set this baby’s routine right. I am going to control feed him, not when he wanted feed. We feed him every two hours only and in the meantime he could cry as much as he wanted to. I also slept with him that weekend as well. After that weekend, he was sleeping at least 4 hours a night and happy to be fed every 2 hours. Marilyn was able to have her rest, I was off the hook.


There’s light at the end of the tunnel

February 2009, we decided to rent out our own place rather than continue to stay at my family’s old house. It turned out to be a great move as the old place was packed with a lot of family things that I couldn’t put or throw away. It also allowed us to be an independent family unit by ourselves, making our own decisions about how we wanted to live. Our new place had more rooms, more space, more control and a better environment for us to bring up Han-Uan and to focus on his routine. He now sometimes even slept through the night.

One day a great idea came to me: I devised a clever little plan to get Marilyn to start the kendo beginner class, hoping she would understand more about Kendo and therefore complain less when I was away from home doing my training. The plan worked perfectly and she is happy as. She could finally meet new people and do something different instead of staying at home looking after baby everyday. A little exercise during the week wasn’t a bad idea as well. Once again, she is off my back and I could focus more on my kendo.

Just as I finally passed my 1 kyu grading and am ready to challenge black belt in three months time, we decided to go back home for a visit in November to have family portraits taken and to visit our family and show everyone what Han-Uan looked like. This put my kendo training on halt for 6 weeks and subsequently resulting in me failing my first attempt to sho dan.

Oh my God when will I get shodan?

I look around the dojo one day, noticing all my 2007A classmates had progressed to black belt and I am the last one left— I started to worry a little bit.

I knew I needed to forget about grading and to just keep training as normal. I thought of Kendo as a marathon and knew that if I just keep going I would eventually get to sho dan and beyond. One good thing about me failing my dan grading is that I could get to participate in the National Kendo Open Champ as a kyu player. Even though I only received 3rd place but a medal is a medal and it is my first one too so I will take it with a big smile.

After the Nationals, more focus was put on training my coordination and basic techniques. Thanks to Marleen’s thoughtful training and Sam’s final revision. I couldn’t wait to tackle my next grading in June.

The view is better from this line of sitting: dan grade cue

There are probably a lot people who are like me or have it even worse, struggling to balance family, work and kendo. I sometimes envy others who have fewer commitments and think “Man they probably don’t know how lucky they are. They can just train without worrying too much about other things.”

There is this adage: "Quitters never win and winners never quit." There are so many people before me who started in kendo, did so well but then stopped. There are times during training I didn’t even know what I was doing, just purely going through the sequences but I did not quit. Kendo just became part of my weekly activities and something I do and enjoy doing.

There was a little chat session the day after grading discussing our feelings after we passed our grading. We were asked to say something and I was just speechless. There are just too many things to say and I didn’t know where to even begin. Many club members were saying they feel very humbled with themselves progressing to the next level. I didn’t think that way, not even a little bit, I think my sho dan is long overdue and personally, I think I deserved it!

It has been a very eventful ride in my journey to sho dan. I know this is just the beginning to my kendo life. I am happy I’ve lasted through this far and am still going. I particularly appreciate all the people who gave me help along the way; I wouldn’t have gone so far without them.