Kendo – The Way of the Sword By Chris Williams 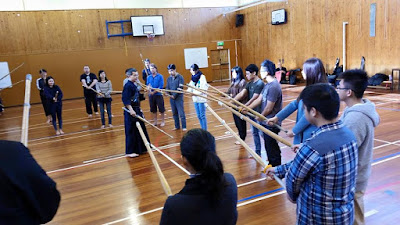 When I set out to write a piece for this paper on the sword-fighting martial art of Kendo, I had no idea just how challenging it would be, to not only try and capture the true essence of the sport using only paper and pen, but to do so in a seriously short amount of time (I’m writing this the day before it’s due – something many students could relate to). Note this isn’t code for a Wikipedia cut-in-paste.

First, a little history: The modern form of Kendo has been distilled from many forms of Japanese sword-based martial arts, known collectively as kenjutsu, and underpinned by the teachings of Zen Buddhism. In 11th century feudal Japan, sword-fighting was the realm of the military man, along with horse riding and archery. While it’s largely accepted that the earliest form of kenjutsu were established during this time, the art truly flourished during the 1600’s; right up until the modernisation of Japan in the 19th century. Banned along with all other martial arts by occupying forces in 1946, it was reintroduced with more of an emphasis on sport and competition six years later, and, due in part to its increasing international appeal, has continued to grow ever since. It is estimated there are between 6 and 7 million practicing kendoka today, with more than 1.5 million practicing 1st dan (black-belt equivalent) or higher ranked participants. There are six grades before reaching 1st dan, known as kyu, and nine dan follow the first.

Despite the seemingly large number of senior practitioners, the path to mastery in Kendo is both long and demanding. Infamous are its senior gradings, widely regarded by practitioners of other martial arts as the most intense, physically and mentally demanding competitions of any Japanese martial art. The 8th dan Kendo grading has a success rate of less than 1%.

So why then, does this ancient form of combat-turned-sport inspire so much passion amongst its members? What motivates a 7th dan kyoshi to spend 20 years of his life trying to attain an elusive 8th dan? What is it about Kendo that is so special? For the answer to this I turned to Hamilton’s own Waikato Kendo Club, based here at the University of Waikato, and spoke with its co-founders: lead instructor/sensei Sam Tsai and wife and club-president Marleen Charng. It was through them that I discovered the true purpose of this story, and could witness the application of principles that kendoka hold so dear. I’ll do my best to explain.

Sam and Marleen are a modest, unassuming couple. Arriving from Taiwan in 1998 for the purpose of continuing Sam’s post-graduate studies at Waikato, Sam admits that without friends or family for support, he had no intention of starting a Kendo club here, “It was an unachievable dream”. Encouraged by Associate Professor Beverly Bell to advertise for a Kendo training partner, Sam posted flyers on the walls of the Rec Centre. Seven months passed before he got his first phone call. A young man by the name of Clayton Tutaki, who worked at the Rec Centre, had seen Sam’s flyer and wanted to train. “I thought this was a great opportunity to make a new friend” recalls Sam, “and improve my English!” Together they met and trained in a corner of the Rec Centre for several months, before the opportunity to partake in clubs day came around in 1999.

Sam was originally apprehensive about holding a clubs day, believing that no-one would be interested in learning Kendo. But spurred on by Clayton and wife Marleen (who was up all night producing posters and promotional material), they held their first Kendo presentation outside the lakes. It was an almost overwhelming success, with 105 people signing up to learn more about Kendo! Once a suitable venue was found, Sam and Marleen held their first proper lesson for 30 new members, “this was the beginning of the Waikato Kendo Club”.

The youngest Kendo club in New Zealand at the time, they’ve gone on to achieve many highlights; including winning the Male Team Champs in New Zealand’s first Kendo Federation Championship in 2001, despite most of the members having less than three years Kendo training.  A more recent highlight was watching another student representing New Zealand in the recent Kendo World Championships in Italy, the first of Maori descent to do so.

Both 5th dan Kendo practitioners’, Sam and Marleen began their Kendo journey as teenagers in Taoyuan County, in the north of the island nation of Taiwan. South of the capital Taipei, Taoyuan is internationally renowned for the development of Kendo, producing many champion representatives over the years. Both have practiced Kendo for over 20 years. Sam happily touts that lifelong participation in Kendo will make “guys more handsome, and girls more beautiful.” While both started Kendo with others who’ve since left, Sam and Marleen agree that the main reason they’ve stayed was because they trained with great senseis, and speak fondly of the friendships they formed with teammates, many of which have been lifelong.

It’s this emphasis on relationships that is at the heart of what has made Waikato Kendo Club so successful. Neither Sam nor Marleen wanted it to be an exclusive club, rather a welcoming place for people to come to train, learn and have fun. “We wanted to have a family-like Dojo as our sensei made for us”, remembers Marleen. The role of sensei is a responsibility, rather than a position. As trained teachers, Sam and Marleen see it as their responsibility to pass on knowledge, to solve confusions and pass on positive experiences. They see themselves as mentors to those who want it. Marleen recalls the advice of a visiting Japanese instructor “It isn’t the sensei that makes themselves so, but the students who want to sit in front of the sensei that makes them so”.

This has not been achieved from day one, but has grown and developed over time, and Sam and Marleen have been keen to take up new and evolving technology such as Facebook, to keep in touch with club members past and present. This warm and welcoming family environment is evidenced by the diversity of the club, in age, culture and ability. The jovial nature and camaraderie between members is obvious and refreshing. More experienced members happily help those new to the art to improve. When asked what the benefits of Kendo are, Marleen is quite quick to point out that this is different for everyone, but for her it was “a way to help me approach and understand myself without getting lost”. She says one thing she knows for certain “Waikato Kendo Club is a utopia for people seeking development and true friendship”.

To mold the mind and body.

To cultivate a vigorous spirit,

And through correct and rigid training,

To strive for improvement in the art of Kendo.

To hold in esteem human courtesy and honor.

To associate with others with sincerity.

And to forever pursue the cultivation of oneself.

Thus will one be able:

To love one's country and society;

To contribute to the development of culture;

And to promote peace and prosperity among all peoples.