This is the fourth time I have had the pleasure of attending Yamagami Sensei’s Kendo seminar.


The topic this year is 攻防一致 / Koboitchi. Most kenyu probably heard of it by the more classical term 懸待一致 / けんたいいっち / kentaiitchi, a realm or level of understanding which we hope to attain one day thru training. That said, how do we actually work on this in our daily training? I think this is a question that many kenyu may also find puzzling.

Through Yamagami Sensei’s guidance, I saw a training methodology and progression that one can follow. Furthermore, I now know how to better train myself and pass on this knowledge and perspective to my students. 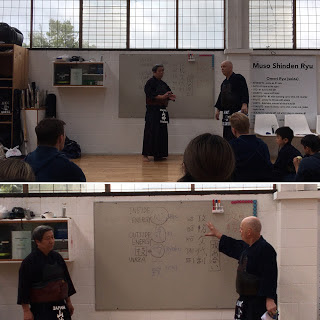 The specific approach is 攻防交代制 / Kobo-Kotai-Sei / System of shifting between offense and defense. At first, sensei separated offense and defense so that one can focus on defense. While the term kakari-te is usually used for the attacking side, for the purposes of this exercise, the kakari-te will begin by blocking (yes, blocking) attacks while the motodachi strike men, kote, or do.

The purpose of having the kakari-te focus only on “defense” is to allow the kakari-te to “open their eyes” and really focus on seeing things; such as the telltale movement of how the motodachi launch certain attacks and other tells and cue recognition.

From there, the kakari-te moves on to pure striking without deflection, such as “men nuki do”, then “men debana kote”, and lastly “men debana men”. My own takeaway from this exercise is that while these waza are not foreign to us, practicing and progressively building the drills up in this way really give us a better grasp of the higher level technique like “men debana men”.

To progress the drill from simply blocking gradually leading up to debana men really demonstrates the level of cultivation and understanding of Yamagami Sensei’s Kendo!

This year, there were six students that came with Yamagami Sensei. The most junior student with him was a 3-dan while the most senior student was a 6-dan graduate student (Miyake Sensei). The other four were all 4-dan college students. Their ability really impressed the local New Zealand Kenshi!

At first, we formed a New Zealand Team that was twice the size of the guest team so each guest has to fight two matches. We tried to match age, gender, rank, and experience in that line-up to maximize the value of the exchange against the “Yamagami Team”.

After the goodwill matches with the guests, each guest became a captain for six new teams where the local kenshi can choose the captain they want to follow for the tournament tomorrow.

The matches between the Yamagami Team and the New Zealand Team were used as shinpan seminar material for the kodansha. After every match, Sensei would provide us feedback on which strikes should have been taken or not, which really elevated the “eyes” of the local shinpan.

While this goodwill tournament may have turned out as shinpan seminar for the kodansha, for the other participants, it was a very valuable shiai experience that formed the foundation for the subsequent events that is to come. Talk about to making friendship from crossing swords!

The main event on Saturday afternoon was split into two groups. The six students that came with Yamagami Sensei shared their shiai experience, technique, and things to look out for to the local kenshi that are 4-dan and below. Having seen and experienced the goodwill matches earlier, I’m sure the local kenshi got a lot out of it even though I didn’t witness the events of that group.

The other group consists of Yamagami Sensei leading the other kenshi that are above 4-dan to a mock kodansha shinsa. We had matches, gave each other feedback, then Yamagami Sensei gave us the concluding remarks.

This is the first time I attended a mock shinsa for nanadan. Compared to the matches I’ve seen on YouTube, it felt much harder! The shinsa required 1 minute and a half, or 90 second, which sounds too long, yet too short. I say it feels like a long time sometimes because I am not really sure what I should be doing or not doing sometimes during the match. That said, I also say it feels too short because by the time you begin to get a sense of what to do against your opponent, time is up!

I am far from ready for nanadan. That said, through this mock shinsa and the debriefing from Sensei afterwards, I feel like I have gotten another layer of understanding to what he said regarding

Sunday morning practice began at 7:30 with asa-geiko. It was an hour long. During that time, I keikoed with a 4-dan kenshi from Japan. His command of kamae, tame, and timing of attack really made an impression on me.

After breakfast, my course work began by serving as shinpan with my colleagues while the six teams that formed after the goodwill tournament provided the matches for us to judge. All the guests served as taisho so that the outcome of the team matches depended largely on the performance of the local kenshi. Rather than focusing on results, the goal was to provide good matches for kenshi of similar experience so they can get the most out of the exchange.

From the perspective of being a shinpan, it was surprising how much an afternoon of team selection and subsequent training provided by the guests to prepare the teams for today’s matches really elevated the level of Kendo here. I really hope that our fellow New Zealand Kenyu, especially the members of my own dojo really take these lessons to heart and incorporate those points back into our regular training.
Lastly I also want to congratulate the winning team where after coming to a stalemate, they were able to win within a hairsbreadth with a kote strike!

The short yet long ninety seconds

On Sunday afternoon, Sensei gathered everyone that is 4-dan and above to lecture on the focus of kodansha shinsa for 5th to 7th dan, then gave us another opportunity for mock shinsa.
On Saturday, Sensei’s conclusion was that while he saw a lot of great shiai, a lot of “yuko-datotsu”, and a lot of shinpan flags flying, he really didn’t see a lot of story unfold before the strike, so there wasn’t really a lot of good ippons.

My own reflection and understanding is that I was not able to “attack before striking”. When the time is ripe, I just struck for the simple reason that “I wanted to win and I was afraid to lose”. This very mentality is the same one I tell my students to avoid having, yet those very thoughts emerged when I lost control of myself in that 90 second time limit!


As a continuation from the mock shinsa on Saturday, Sensei used 先の礼法 (the etiquette of initiative) in kamae as the basis to discuss how to elevate your ability in “koboitchi” (attack and defense as one) through studying the role of uchidachi (sen no sen) and shidachi (go no sen) in the Kendo Kata.

Through the translation of Sayer Sensei, President of the New Zealand Kendo Federation, the meaning of “sen”, beyond moving forward, also has the connotation of connect with intent. My understanding of it is that it is the feeling of “Let’s get ready to rumble”, but not attacking rashly. That is the feeling that “sen” should provide.

In concrete terms, the three main points to pay attention to are:
After the lecture, and the second mock shinsa on Sunday, everyone improved a lot.

For me personally, there are two major flaws that I would still like to address. First, when the opponent is attacking aggressively, I find myself on the defensive most of the time, but Sensei suggest that I should take the fight back to him, rather than fighting in the opponent’s rhythm and losing control of the fight itself. The second point is to maintain self-control and not attack rashly to expose my own weakness and lose the spoils of war.

It just so happens that the New Zealand School Holiday began after the seminar, so I can review in my mind these teachings. While seme, sen, maai, chushin, ashi-sabaki, zanshin, shiai, shinsa, and shinpan are not unfamiliar topics, through Sensei’s watchful eyes and guidance, I gained a deeper level of understanding in these concepts. I am very grateful and will continue to practice diligently and incorporate his teachings into our dojo curriculum and keiko so we can teach and grow at the same time, both teacher and student!

I wrote Ishida Sensei’s teaching on Facebook to remind myself this: “In the practice of kendo, striking the opponent is the second most important thing. The most important thing is did you go through the motions you are suppose to first?” After all these years of kendo, we should be able to hit the other person more or less some of the time. That said, “how you achieved the strike” is what the aspiring kendoka should really pursue. It is not just Yamagami Sensei, every kodansha sensei reminds me tirelessly of this such that I have come to understand that this is secret to why “learning technique” can “polish the mind”!

While my initial intention was to keep this memory and some personal reflections, I really appreciate David Pan from Bellevue, Highline, and Sno-King Kendo Club not only read my blog but also put efforts to translate it into English. This makes my learning in the Yamagami Sensei Seminar can be shared with more Kendo friends! Really appreciate it!

Yamagami Sensei is Kyōshi Hachidan and is a professor at Kagawa University. I feel privileged to have opportunity of attending his Kendo seminar in NZ - thanks to Auckland Kendo Club and all the people working hard behind the scene!

Unknown said…
Thanks Sam that was really awesome to catch up on this great teaching
10:46 am