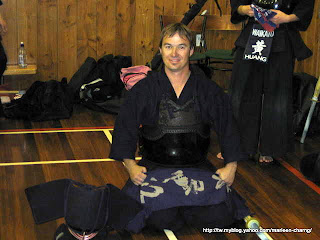 Wow - what an experience!

After months of training I finally had my first chance to hit someone in an uncontrolled fashion yesterday. Having missed out on gi-keiko opportunities through my absence, my first chance came in an actual shiai.

We had to pick a number and see who we randomly drew to fight. Luckily for me my first opponent was Leo - the awesome Ni-Dan!!!!

Thankfully Leo was kind to me and allowed me to last for one minute of shiai before dispensing me with a tidy men cut made possible by my foolish attempt to cut kote on the wrong hand - his left.

The whole experience was okay, apart from the slightly embarrassing feeling of knowing that I was making mistake after horrible mistake in front of all my peers.

The beauty of fighting Leo was that I didn't feel as nervous because there was no way I could win, and I knew he would go easy on me, so I just got to try some techniques. I was silly to even consider trying kote and do, but I did and missed, giving Leo easy opportunites to strike. This in itself still proved valuable, as did every second of the experience. I found myself trying to balance the desire to demonstrate determination and passion, versus an interest in trying different things. I also felt pressure to strike quickly so as not to appear afraid, without really knowing how to make or wait for a genuine opportunity.

Afterwards I felt very good, knowing that I had had my first experience and I was delighted to have the honour of fighting someone so talented. Naturally Leo was very kind and humble afterwards. I felt that I had now taken another step towards joining my clubmates as a genuine team member.
The interesting part for me psychologically came later as, rather than learn more after class with our kind sempai Clement, I had to go. Once I had left different feelings began to flood me - uncertainty, disapppointment and a feeling of failure. I think this was partly because it is such a big thing to build up for an then to not do very well is quite crushing. It is also quite powerful how people react to you afterwards. Some are encouraging which is kind, some pick out actual things you did well, which is great, but when people say "dont' worry..." etc, it makes you feel like you did more poorly than you realised and then I felt that I was REALLY bad. Thankfully I was able to reflect upon this and realise that this was my true opportunity to learn and grow from the experience. It has given me a benchmark of my own ability from which I can only improve. It has lit a fire in my belly to take every opportunity, without fear, to learn from my kendo friends. I think learning from failure is the hardest but most effective part of training... maybe. What do you think?

It was great to watch Adam, Joseph, Sanjiv, and Alba fight so well. Even Joyce fought! I think it may have been her first time and she was courageous - she is like a tiger.

I can't wait to fight at my own level to see how much I improve next time.

Other key moments of training stuck in my mind. Doing ashisabaki [footwork?] with Clement was very educational. His complete application allows less skilled kendoka to learn more. At one stage Clement effortlessly let my kensen slip away from his and I thought it was because I was pushing too hard. He told me it was because he noticed my focus was slipping. I hadn't even noticed - kendo is such a subtle sport!! Wow.

The other cool moment was enjoying the new technique of striking your opponent immediately after they turn from a men strike and zanshin. I really enjoyed practising that with Sensei Marleen who is so kind and encouraging.

Have a great weekend team - see you Tuesday :-)

It was a great shiai to me as well, I learnt alot from the shiai last
night.

MrWoody said…
It really helps to talk to others about your performance/experience.
Kendo is such a great personal journey, but it is better when shared with others.
:-)
7:28 pm