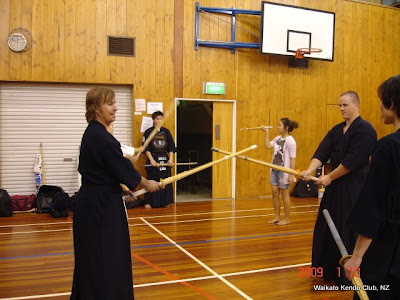 Wow! What a difference a week makes. This time last week I was gathering my resolve and determination to take the hard lessons learned from my first shiai and use them to improve my training for shiai.

I arrived at training yesterday knowing it would involve some shiai and was feeling excited by the prospect as I could only improve from my first effort which saw me making foolish mistakes in my nervous attempt to avoid appearing afraid. Before shiai however, we had a monster training involving my first gi keiko.

I was fortunate enough to train with our talented fighting friends, Clement and Do Hun. What more could you ask for!? Two of our top competition fighters and both with different styles and approaches to training. I was already tired but I had to give it everything to try out techniques on Clement who is a committed and serious training partner, as well as a good kendo friend who generously shares advice. After the hard training build up and several minutes of striking at poor Clement, I was very tired. My arms felt like lead weights.

Then came Do Hun [sp?] who has speed and agility to burn. I struck at men and fell backwards, completing a backwards roll in full armour - quite funny for my training partners to witness no doubt! Perhaps I could become a kendo stuntman?

After Do Hun I had my first chance to see how I compared to one of my fellow beginner's group - Adam - who trains with so much commitment. I had seen Adam fight in shiai the week before so I knew he was very confident and committed to forward moving attack with multiple men strikes. Luckily for me, Adam had also given everything in training and was similarly drained of energy. He did however show me how clever he was at hitting kote. He scored several clean cuts on me that way. Something extra to watch out for in shiai!

After Adam I was so exhausted. Then came the news - we would have shiai again! Just when I thought I had no energy left.

We lined up and I was opposite Leo again - time to swap! I exchanged Leo for Clark [1st kyu] who I have admired for his training and really appreciated his thoughtful and sincere feedback about my own training. Clark is very generous and an excellent sempai.

Before our fight, Clark [Wen Luo] had to face the dreaded Joyce! Joyce softened Clark up for me and left him a little tired so I would have a better chance against him. I knew that Clark would show me respect and not go too easy on me. [We learn more this way.] Just before our fight, Robin sempai advised me to avoid retreating in the face of Clark's attack, for he would use that opportunity to strike men repeatedly. I took his advice and moved forward constantly. I enjoyed the sensation of having no fear and moving towards the battle. Clark was an excellent opponent who dispatched me with two clear points, just as Leo had the week before. [I seem to be a the weak point in my team in terms of giving away points.]

I enjoyed watching the rest of the battles and then was very grateful to receive advice from Clark afterwards. He is an excellent teacher who notices thing and shares them so we can improve. Apparently I struck him several times but scored no points as I had not performed fumikomi. This will be very difficult for me to rectify and it is something we were all reminded of at our last grading by Alan sensei [if I remember correctly].

Robin also very kindly told me that I needed to show more commitment to my strikes by demonstrating zanshin - something i had not done at all whilst moving forward. This too will be a challenge, and is something to work on for next time.

In summary, you may recall that last week I spoke of feeling dejected afterwards, as no one gave me any constructive advice and I felt i must have been so bad that people felt sorry for me and did not know what to say. This time I kept it simple and was delighted to accept advice from my generous sempai and sensei.

I have two clear things to work on for next time - zanshin and fumikomi.

Lasto - Sensei Marleen asked the sempai judges to name "fighting spirit" award. They had not thought about it so we missed out... until afterwards that is when Sensei Marleen awarded it to me! I was so proud.

Truly a night to remember. [and my arms do today!]

A response from Clark / Luo Wen:

To be honest, I feel you are so good and amazing in your learning process. When I was in this stage, I was afraid to cut forward because I did not have enough confidence and courage (actually, even now, I am still not good in this area). However, you do show me how to really enjoy the kendo. Just as Marleen sensei and lots of senpei (Robin, Awa, Clement)said: just show what you have and enjoy the play, do not need worry about win or loose, it is a life long martial art. Technically, I want to say that I do not have good stepping and zanshin, either. I know I did not presented a good stepping when I was fighting with you, especially in the second men cut. I think I can get the point because I played a drama haha :). Hope we can learn more from each other. Have a nice day :)

By the way, I want to say "thank you" to Awa senpei. In the gi keiko and shiaikeo between us, he showed me how to through out 100% energy to cut. I think that is just like what Sam sensei taught us last year: do not hesitate or think too much when you're are fighting.

It's good to read your reflection here. :)