How do you practice seme?

How do you practice Seme?

In 2017, Utsunomiya sensei, 7-dan kyoshi, came to visit us and taught me the concept of “okori”. That reminds me of the conversation that happened 8 years before that in 2009 with Morioka sensei, also 7-dan kyoshi, who asked me:

“What is the timing or reason of your strike?”

I think most people are familiar with the idea that you should “seme then strike”. However, when do you strike after seme has been a source of struggle for most kenyu.

That’s why when I saw the video from Kobayashi Hanshi where you seme for the purposes of creating “okori”, I felt this added a whole other dimension!

Moreover, Kobayashi Hanshi made a distinction between “seme to strike” and “seme and strike”. To me, that further, this further illustrates the concept of 懸待一致 / けんたいいっち / kentaiitchi.

So, while it is easy to understand what Kobayashi Hanshi’s explanation on a conceptual level from his video, how do you bring what he said back to your own practice?

How do you actually practice seme?

Clearly, there are many ways to practice seme, and each sensei have their own expertise and understanding on this matter.

That said, I would like to share the advice I received about ten years ago in 2009/2010 from Morioka sensei. I have diligently trained in this manner for several years. If you haven’t found a good way to practice seme, why not give this method some consideration?

Focus on doing only these three techniques:

Here’s the rationale from which you should execute the three techniques above: 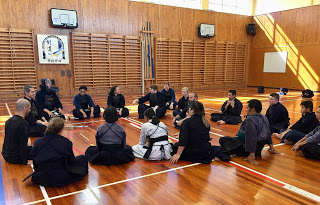 For those of us with some experience, we probably lost count on the number of times we got de-kote or kaeshi-do from our men strike.

Do not forget the important adage for kendo:

If you hit, reflect. If you are hit, be thankful.
打って反省、打たれて感謝
(utte hansei, utaretara kansha)

The reflection from striking is this. Notice reflect is a neutral term. Reflection can mean reviewing what happened when the execution was unsuccessful. However, what we are referring to here is about reflecting for continuous quality improvement, even if the execution is successful.

Even if your strike was successful, how do you make the next one better? This isn’t the same kind of reflection as reviewing what went wrong. It’s about continuous improvement.

As for being struck, what you are thankful for is how others point out the gaps we have thru the course of their own training. Maybe we simply were not fast enough, or made a mistake in the execution, or have a flaw in the plan itself, or maybe we simply did not pick the right moment, or maybe we telegraphed on intent. To be grateful in receiving the feedback is the first step to improving and fixing those problems.

This is also why it is said that you have to be struck to improve in kendo. The way to get over your plateau in kendo is to get over the fear of being struck. 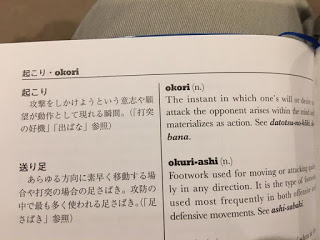 To put it simply, Okori is that moment when the thought to strike arises.

Coming back to the three techniques to focus on earlier. Be ready in chudan and rely on our footwork and our control of the shinai to seme the opponent’s men. But when the moment arises, do not just strike in haste. This is tame. That said, when the moment is ripe, you have to strike with sutemi. Even if you made an error in judgement, you must follow through like the “touch-move rule” in chess where if a player deliberately touches a piece of the board when it is their turn to move, then they must move or capture that piece if it is legal to do so and accept your loss, instead of aborting your attack and abandoning your zanshin in the process.

Remember: keiko is not shiai, nor are there trophies involved. Keiko is a polishing process where you accumulate your strength and skills. In many ways, keiko is more a real test of the self than shinsa or shiai.

Perhaps a better analogy is this:

Do you want to win the battle or win the war? 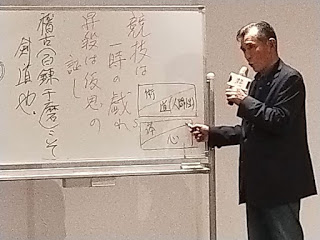 “Shiai is but a moment’s play.
Shinsa validates the direction of your learning.
Everyday practice is the foundation of kendo.”

Looking back at my own practice in the last decade, I did somewhat avoid competition intentionally because I did not want to compromise my practice with the pressure of competition results. I did not know at the time whether the intentional avoidance of shiai would be a good thing or not but did know that I did not have the mental fortitude to emphasize correct kendo over winning in the shiai-jo. However, overtime, I found myself better able to attend some shiai and embu in New Zealand with Heijoshin and view those events just as another aspect of training.

From this process, I have come to learn that focusing on the three techinques Morioka sensei talked about helped me understand the true meaning of “Ichigan Nisoku Santan Shiriki 一眼二足三膽四力”. I started to “see” things like timing, sen, okori and such.

Another benefit of focusing on those three techniques is that they cover both shikake and oji so that regardless of whether you are striking or being struck, you are focusing on being ready to both attack and defend so that over time, you come to understand how to hold kamae with the sense of 懸待一致 / けんたいいっち / kentaiitchi.

In short, you cannot truly have effective seme unless you have a kamae with 懸待一致 / けんたいいっち / kentaiitchi. When you are pressuring or baiting the opponent, if you can see okori, then you can naturally take the initiative (sen) and strike the opponent effectively in both mind and body: you would strike into their heart and win before you have struck.

What I find most interesting in my journey is this. At first, I could only see “okori” from the opponents physical preparatory movements. However, over time, I found myself starting to be able to sense when the opponents started to think about striking and know that they are coming even though there were no telltale physical signs in their body or movement of the kensen. It was this mental aspect that help me begin to understand what kodansha sensei were saying about the relationship between “heart like a mirror” and “四戒/しかい/shikai/four sicknesses”. 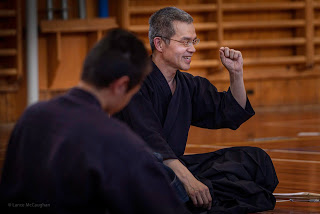 The blog article above was originally written in Chinese in February 2021 by Sam Tsai Sensei.

Thanks to David Pan from Bellevue, Highline, and Sno-King Kendo Club for the effort of translating the original post in Chinese.