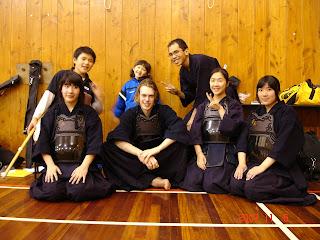 
I don’t remember the last time I cried. Probably when I was young, whenmy mother left to go overseas or something like that. Well, yesterday I got pretty emotionally choked up: but out of happiness and understanding, not sadness or anger. As Omar put it – I was shell-shocked, after Jeffrey taught me what was probably the most important lesson of my kendo life.


Let me explain. I am not an angry person. Generally, if someone annoys me, or makes me angry, I just walk away and get over it. Even when I wasa stupid young kid in high school, and we had fights on the field after class (as stupid kids tend to do), I was never angry, and always made sure the other person was alright.


I can’t really recreate in writing how I felt yesterday fighting Jeffrey. Perhaps the best way to put it would be to say it felt, for thefirst time, as if it was real. The normally polite and calm Jeffrey was suddenly fighting, or so it seemed to me, as if he wanted to kill. Trust me: there is a huge difference between watching him do this and being onthe receiving end of it. I’m not sure if it was just 90% or 100%, but it doesn’t really matter: to me it was the same, I didn’t know how to deal with it – I was overwhelmed.


How do you deal with an opponent, after 2 months in bogu, who will not help you in any way, who keeps attacking relentlessly, who does tsuki cuts on you for the first time, who's shinai never opens? I can’t see anything: there’s sweat in my eyes: “keep going!” I have no energy:“keep going!” Give me a chance, I can’t even hit you: “keep going!”


How did I deal with that? .... I gave up. And I think it was the most important moment of my kendo life. I realised many things in that moment. By whining and complaining, and making excuses, I was looking for a way out instead of going forward (now that I realise this I am ashamed of it). Expecting Jeffrey to give me a chance, an opening, “I’m only a beginner!” and so on. Why should he give me a chance? Why should anyone give me a chance? This is true both in kendo and in life.


Simply to hear these things is not enough, I had to really experience them to fully understand them. And now I see things differently. BeforeI thought spirit was just yelling and shouting and throwing yourself at your opponent, but now I think I understand it better... it’s hard to put into words: spirit, for me at least, is the opposite of what I felt yesterday: fear, shock, frustration. And now that I understand this I can work towards it.


However, I think a large amount of frustration came from the fact that I was expected to show spirit, yet I was powerless to do anything. It was as if there was a brick wall between Jeffrey and me, and Jeffrey was on the other side yelling at me to attack. How? By running at the brick wall? Shouting at it? The frustration came because I do not have any technical ability with which to show spirit. How can I show spirit when I do not have the tools to destroy the brick wall? How do I attack when there is a shinai in my chest every time I move forward? I believe these are the things I will learn with time, and through which I will be able to show spirit when I have learnt them. But I also believe that the amount of frustration I felt, the utter disbelief, shows that there is some spirit in me, trying to get out. If I had had no spirit at all Iwould not have cared about not being able to attack, and would have forgotten about it afterwards.


I believe this was the most important lesson I have learnt in kendo, and perhaps even in the last few years of my life. Jeffrey: I really meant it when I said ‘thank you’ yesterday. I believe no amount of words could have made me understand what I understand now. I will never forget it.
Thank you, thank you, thank you.


Secondly (if anyone is still reading):


I would like to say a big thank you for training with me to anyone who I did not say goodbye to yesterday. After leaving the dojo I felt very sad, and I realised how much kendo and our kendo family really means to me. I can only hope to find such a great group of people to train within Japan.


(also to Leo and Darrin: I’m sorry I didn’t say much or make any sense,my mind was still racing with what had just happened to me. *bow*)