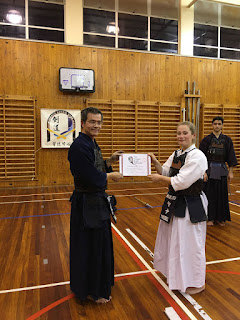 Up until 2015 I was playing volleyball and lived through that sport. In January 2015 I got a really painful muscle spasm in my lower back. Then we found out I had scoliosis. I was 14 at that time, which is the latest age for fixing things like scoliosis, leaving me with little hope for playing sport in the future. This news meant I couldn't continue volleyball, as my spine simply couldn't support the pressure of jumping, landing and colliding. My mum forbade me from playing volleyball or doing any other type of sport from then on. This really made me despair, as a big chunk of my life was gone, and so is its social/physical benefits and the feeling of being alive.

Sometime later I also got asthma (living in an old house), which made my physical exercise experiences even harder for me.

Around the same time 2014-2016 I was reading a book series called "Young Samurai" which described a range of Japanese marshal arts people had to learn to become samurai. In a fiction form, of course. I really got interested in kenjutsu, because it seemed to me as cool and in the same time fun. Cool because of fights, and fun because the main character trained with his friends. I got curious if this marshal art still exist in the world today, and to my great surprise I found out that there is a Kendo club just in Waikato university. From the first look I wanted to take part in it, and mum seemed alright with it. So I joined and I never regretted it. By the time we learned how to do the proper ashi sabaki (footwork) my back and asthma were somewhat under control, which let me proceed with further training. It was amazing actually, and I think kendo played a role in fixing these things.

Fun fact: In 2018 I played a season (2 terms) of football to increase my stamina and get more muscles in my legs. Which also amazed me, that I was still able to play sport after 3 years.


2016
Focus: Ashi sabaki, kihon and kiri kaeshi.
Mainly footwork, kihon waza and trying to remember other people's names in the dojo. Everyone is very shy, including me. Kiai is very hard.
Morioka sensei taught us about zanshin, and he was very funny. 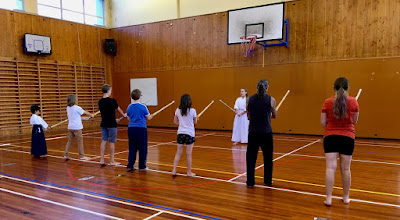 _
2017
Focus: Midori keiko, kiai and tai atari. 3 kata. 3 waza.
I learned that the more I practice something difficult, the easier it will become, even if I don't understand it yet.

Novice 2017
I learned that there is a joudan no kamae and nito (2 swords).

I lost all my fights, and afterwards Sam sensei told us about losing and winning, and how he got fighting spirit in his first shiai.

I thought it would be great to get fighting spirit next year. 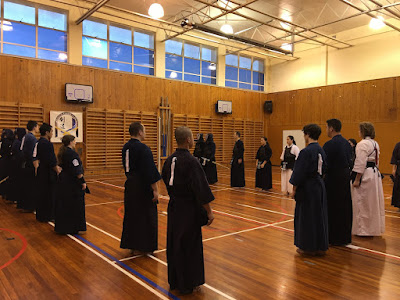 This year, and the previous years, Sam sensei and Marleen sensei and my senpai taught me and helped me a lot in my kendo journey. I am very grateful to have such kind sensei and senpai. I need to train as hard as I can to not let my sensei and others in the dojo down. I want to get as strong as Joyce to match higher level people and help my senpai and everyone in dojo to improve.

I feel like I'm not only improving in kendo, but also becoming a better person in life, in terms of being confident and decisive.

_
April 2018
Birthday keiko! It was extremely tiring, but I understood what Sam sensei was trying to show me, and that is; using my mind to move the body, no matter how painful it got. I was, again, so grateful to have Sam sensei teach me kendo! 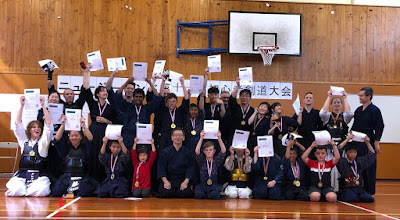 I won some of my fights and lost most. I could see the training pay off in the real shiai. I got fighting spirit, just like Sam sensei, and that made me very happy, because to me it was a great honour.

I need to stop stepping out of shiai jou and stop thinking too much.
Clark helped me to improve my small men, even though I was tired. 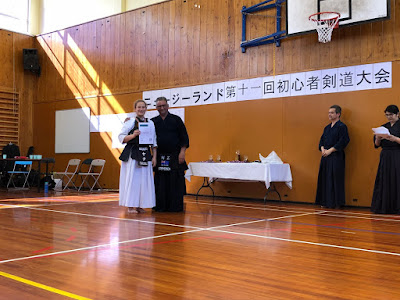 _
Nori sensei taught us a number of things. He was very kind and patient, especially with me (I'm very slow in learning new things).

Extra focus: I need to master ki-ken-tai ichi before he comes to New Zealand again next year! 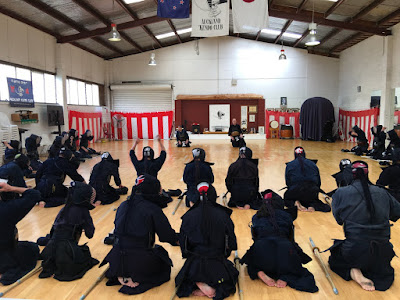 My first time in Auckland kendo club, I was nervous. The training and people's kendo was different, which was a good opportunity to learn new things. The most surprising part was the feeling like we knew each other for a long time, when training with people I met for the first time in my life. Kendo is truly an amazing marshal art. 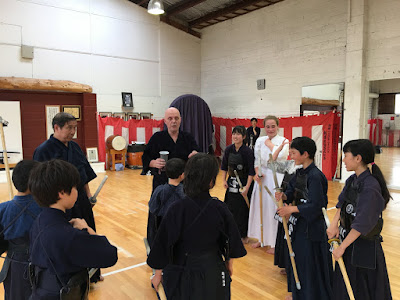 I met Yamagami sensei, and even thought I didn't get chance to fight him, I learned about san sappo and 4 sicknesses. Most of the seminar was in Japanese, a great opportunity to practice my Japanese listening and talking! His 6 students from Hiroshima were very friendly and also strong. 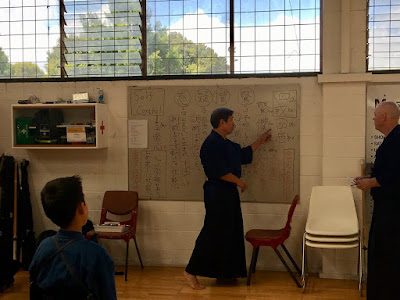 In kyuu grade shiai I clearly saw my mistakes as I was making them. I still felt a number of things I need to work on for the next shiai. Also, new opponents provided new strategies, which was interesting to analyze for myself.

Wells sensei helped me improve my walking in terms of not looking down and use my ki.
The iaido demonstration looked impressive, and it made me look at kendo from a new perspective. I got to hold a real katana (thanks to Brent sensei). It was heavier than shinai, and very beautiful. 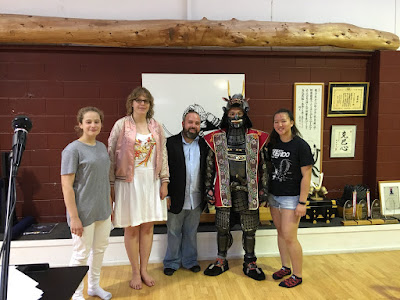 The highlight was my last keiko of day 2, which happened to be with Blake sensei. It was the hardest one that day in terms of my tiredness and expectations. I really wanted to show my best kendo to the sensei, but my tired body was preventing me from doing so. I had the feeling of being pushed to my limits as with Sam sensei, and that made me think to myself; "So this is what kendo is really about, isn't it? To overcome oneself." At the end of the keiko, Blake sensei said something along the lines of me doing great, but my brain was too burnt out with effort to interpret any information. I said thanks, but really I was just happy with my realization and really grateful that he went into that effort for my benefit, even though we never met before. I was glad that after all I could still do my best to represent Sam sensei's and Marleen sensei's dojo. 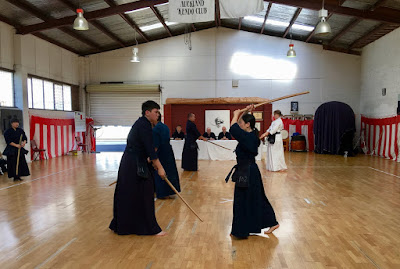 And to conclude my seminar experience, watching Jing, Claire, Joyce and Rex pass their gradings, I felt very proud. It's a great feeling seeing your senpai succeed.

SonjaHauen said…
Hey, Sam! Greetings from another kendoka! I have scoliosis too. How do you manage back pains? And did you perceived improvements in your spine curvature? Thanks in advance
10:47 pm