My weekend experience by Andrew Fraser 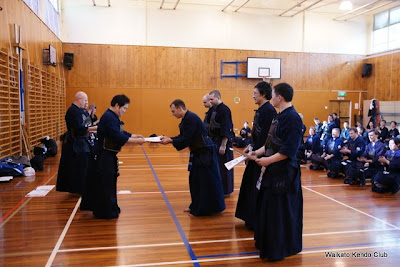 Andrew accepts Shoden certificate from Morioka sensei
This year's camp was a constant learning experience and the atmosphere created in our dojo was something really special. There were many great moments, including some BFO 's (blinding flash of the obvious) and also some BFI's (blinding flash of inspiration).

Some highlights for me were:
-- Doing practice with so many great kendoka.

-- Watching so many great kendoka practicing.

-- Doing ji- keiko practice with Morioka sensei as part of a group of five fighting him at the same time, each time someone scored ippon (rare) or was ipponed by sensei (not rare) they sat down and the group reduced by one. During one of these rounds he led the group into a corner then picked them off, one by one.

-- Morioka sensei demonstrating a kata with only one breath.

-- When we went for grading Morioka sensei sent each one of us out the door with a "fight-to" and a "hara adjustment". I was very nervous before the grading and this helped to ease my nerves and get me back into my centre.

Thanks to Clement for the kata practice before grading, it really helped me a lot. I was going to practice at breakfast with Richard however I had to get breakfast for the sensei's so was unable to practice at this time. All I could think about before the grading was if they (the sensei's) liked their coffees.

I was showing someone the photo from the newspaper of Morioka sensei and they said "is he that good he doesn't need to wear a helmet" [men]. Yes was my reply.

I believe Morioka sensei showed us more than just amazing technique but a spirit so full and generous it had no choice but to overflow into each and everyone of us this weekend and inspire us to be better human beings.

Thankyou to Sam And Marleen sensei for inspiring us every week to be the best we can. And to the rest of the club thankyou for all of your hard work on making the weekend a success.
Kind regards,
Andrew