Things I learned from the National Seminar by Amigo Huang 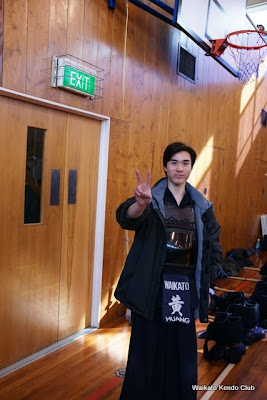 Things I learned from the National Seminar.

One of the most important thing I learned from Morioka Sensei is the idea of “holding the pressure”.

Kendo beginners are often encouraged to “attack first” and “be more active/aggressive”, which is not wrong. However once they gained experience and knowledge, they often became too active and aggressive, striking mindlessly.

Morioka Sensei's said that we need to try to “hold down” our feeling of attack, this does not mean we should “wait” or “don't attack”, this means we still need to have the intension of attack, but do not “release” it until the timing we want comes.

This reminded me what Yamaji Sensei was talking about few years ago; tame.

Yamaji Sensei's original description was “the feeling of like you have pulled the arrow back on the bow and are about to shoot at anytime”. Sometimes we attack first because we are scared, it is hard to take the tension/pressure so often tries to avoid it by striking first. Sometimes we attack mindlessly and continuously just so we can hold my opponent down avoiding the kamae-to-kamae situation/tension.

Morioka Sensei told us that we need to have courage to tolerate/resist the feeling and not to be afraid of being attacked (Sam Sensei also told me the same thing.)

This also follow up to what Morioka Sensei said about “the important thing is not the attack, but what you do BEFORE your attack.” ie. Your posture, your mental status, your position.

Another thing sensei told me is that when in tsuba-zeriai don't always be passive and go back, I should stand strong and pressure the opponent to go back.

Personally I feel Morioka Sensei's teachings for the seminar is very well focus for people with few years of kendo experience(very helpful for going to 3rd dan). However it is less suited for the those people who are just starting to do shiais.

I recommend those people still need to develop their vigor and be more active/aggressive during shiais, in order to learn the most out of it.

From Jason:
Jason said I need to be more “heavy”, my kendo is too “light”(eat more, i guess...). My kendo need to focus on going downwards and be more sturdy/stable. This will make my kendo look more powerful. He said that if I want to go to 3rd dan, I also need to calm down and push my opponent giving him/her more pressure rather than keep attacking.