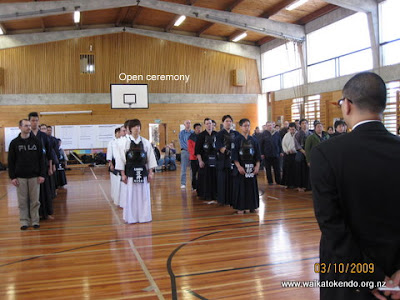 Part 2
On to the shiai.
We arrive at the venue in good time for the weigh in. All is well so Adam and George get changed. The Taikai is officially opened and the competition begins.
First to fight are the juniors and as there are only 4 competitors the action is over quite soon.
Next up are the ladies for the women’s open. We didn’t have any ladies entered so again we sat and enjoyed the action. Maybe next year? Annie? Debbie? … Or?
Now it’s time for the kyu grades and we have Adam and George competing so our adrenalin starts to flow.
The format is of pools of 3 or 4 and the top 2 from each pool go through to the next round. Then quarter, semi and then the final.
Adam.
Fight 1: Step in, bow, three paces, draw shinai, sonkyo. … Hajime! Within 10 seconds they clash and Adams opponent is on the floor. From now on Adam seems a little thrown and is not fighting like the Adam we know. Slowly Adam begins warm up and relax a little. I can’t recall exactly how the fight went but Adam lost.
Fight 2:
In his next fight Adam had an awkward opponent who did a lot of pushing. Once again we didn’t see the true Adam and unfortunately he lost again so Adam doesn’t get beyond his pool. His Kyu grade competition was over.
George.
I don’t remember too much about Georges pool matches but he fights well and progresses to the quarter finals. Then to semi’s, then the final
George must like shiai … because his fights last forever. One of his pool matches … went to encho. The semi final … a long encho. Then only a 5 minute break and it’s the final. What happens? Yet another long encho. It was exhausting just to watch. I’ll let George tell you of his fight but all I’ll say now is that no one could have come closer to winning and come second.
We now break for lunch which is a foot long subway. Mmm, very tasty but we only dare take one or two bites if we want to be able to fight.
Lunch over it’s junior dan, I lose both my pool matches, maybe I could have won if I had a little more fire in my belly? I was much too calm; I needed to be a little more nervous to help the adrenalin flow.
Do-Hun fought well in all his fights but although it looked like he scored kote several times the shinpan never seemed to give him any points. As he finished his last pool match he joked of the shinpan “I don’t think they like me”. This became standing joke throughout the weekend, more of that later.
Clement and Awa were drawn in the same pool (again) and fought well as they always do. There was even an extra fight between them to see which of them went to the next round. It was a shame because it would have been nice to see them both progress.
Anyway, Clement goes through but is knocked out in the next round so individuals are over. We watch and admire the senior Dan’s.
Now back to Rowena’s for a quick shower then on to the dinner. It’s Adams first time in a Chinese restaurant so he’s given a quick lesson with chopsticks and we all tuck in. The food is good so there’s much eating, lots of talking and a little drinking. A good time was had by all.
Back at the lodge Marleen and Joyce bid us good night and we boys decide to watch some of our fights on the video. There’s plenty of light hearted banter so when Do-Hun say again “See! They don’t like me!” there’s much laughter there’s a comment of “maybe its Koreans they don’t like?” More laughter. Eventually we tire and drift off to sleep.
Day 2 is the team event and Waikato B (Adam, Do-Hun, Robin) are first up. We fight Hutt C/D?
Today Adam fights well and wins. Do-Hun has no opponent so wins and I win mine. Were through to round 2. Waikato A win there first match and go through also.
Waikato B against Auckland A (the eventual winners). We try our best but as to be expected we lose and our Rembuden is over. Do-Hun jokes “they still don’t like me”.
All our attention turns to George, Awa and Clement. They win their next match and are guaranteed a medal. Now they are up against Rembuden A, They fight valiantly but are defeated so have to still for bronze.
To close the event there is an invitation shiai, 12 in each team, between Rembuden and Rest of NZ. Clement and Do-Hun are chosen for the NZ team. Clement fights well then its Do-Hun. Do-Hun fight is the best that I have ever seen him fight and it’s against a quality opponent. Do-Hun wins! Hooray! We all give him a pat on the back and say “see! The shinpan do like you.”
Rembuden is over … Let’s go home.
To be continued ……